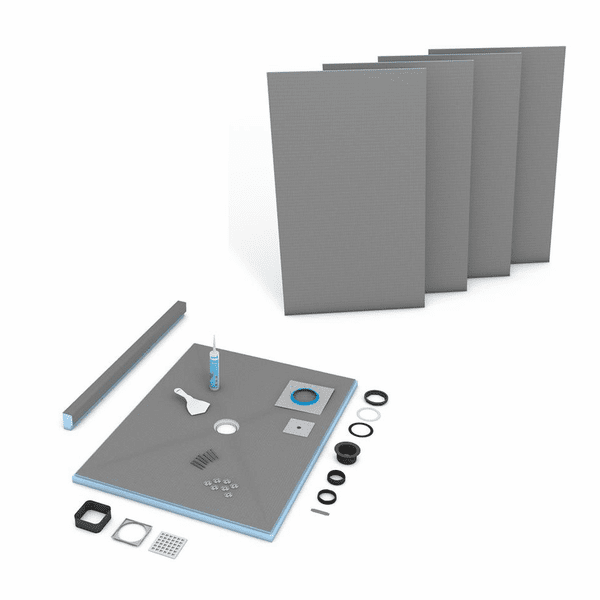 Wedi has been producing simplified as well as customizable shower systems for over 35 years. As it is still a family-owned company to this day, its dedication to quality products far surpasses that of many other run-of-the-mill custom shower producers, with unmatched attention to detail and customer satisfaction in mind. The Wedi Fundo Riolito shower kit is no exception to the company's high standards, and its all-in-one design will inevitably save you time and money during your next bathroom remodeling project.

When many people finally decide to remodel their bathroom, many self-starters who have no problem fixing other things around the house tend to find themselves over their heads, dealing with building contractors, plumbers, and inspectors, depending on where they live. Traditional shower installations and do-it-yourself jobs don't always go together very well, but with Wedi Fundo Riolito, installing your shower can become much easier, as it is designed to bypass the more complicated drainage involved in traditional shower installation methods. In contrast to many other shower kits marketed as "all-in-ones," the Wedi Fundo Riolito kit actually contains most of what you'll need without having to order tons of extra accessories. Once it arrives at your doorstep, you'll be satisfied knowing that basically everything but the drain cover is in the same box.

Wedi Fundo Riolito comes equipped with fasteners, joint sealant, one full foam curb, one full drain assembly (minus the cover), building panels to cover up to 80" of walls, a floor element, and a shower pan. This product is ideal for constructing a corner shower that is level with the floor to whatever aesthetic features that fit your heart's desire.

Riolito's technical specifications are just as impressive as its all-in-one design. The shower kit boasts a flexural strength of 627 psi as well as a pass for heavy duty commercial use under the Robinson Floor Test, which uses a machine with moving wheels directly applied to the surface under increasing amounts of pressure to test the surface's ability to handle stress. In addition to soaring above waterproofing standards, the Wedi Riolito system is resistant to fungus and bacterial growth, a property that is always desired but not always fulfilled when using inferior products or unqualified contractors. No potential for bacterial or fungal growth also means no additional costs to remedy any defects in the future over the life of the shower. There was also no disintegration or change observed during testing for durability during freeze/thaw cycles, another assurance that this shower system will not degrade prematurely. With a Wedi shower kit, you can feel rest assured that you'll be able to enjoy it for years to come.

The warranty that Wedi offers is another notable feature. It is variable depending on how you decide to install your waterproof shower. The Fundo Riolito kit of course comes with Wedi's standard 10-year warranty that it offers on all its products. This can be extended to 15 or even 20 years if certain conditions are met, such as the use of PRO certified or registered installers, integrating Wedi's Subliner Dry waterproofing membrane, and waterproofing the entire bathroom, as in not just the shower. It's no surprise that all of these options are offered, since Wedi is very on-point with tailoring their products to the varying needs of customers. So whether you're remodeling an investment property or installing 300 showers in a brand new apartment complex, you'll know that Wedi has you covered.

Another benefit to the Wedi Fundo Riolito shower system is that it can be installed directly above both wood and concrete subfloors, giving your remodeling or new construction project a little bit more flexibility than Wedi's competitors can. Its watertight drainage system will also ensure that no excess moisture seeps into any area where it shouldn't.

One more thing we need to outline is a brief note on do-it-yourself (DIY) installations. While many people have no problem at all installing laminate floors, wall tiles, or even carpet, extra care should be taken with shower remodeling projects. The separation between the moisture within the shower while it is in use and the subfloor below is vital to having a shower last as long as it is expected to. Cutting corners in bathroom remodels should never be a considerable option, but with the Wedi Fundo Riolito shower kit, preparation and installation should take much less time than traditional shower installations that use a water-in-water-out system. Call one of our experts today and ask them about the Wedi Fundo Riolito shower kit sold right here on Qualityflooring4less.com. 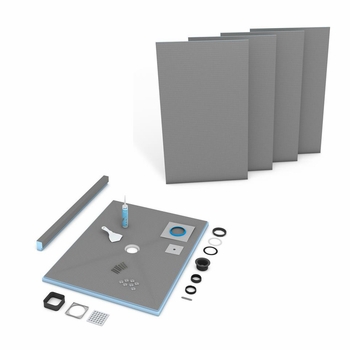 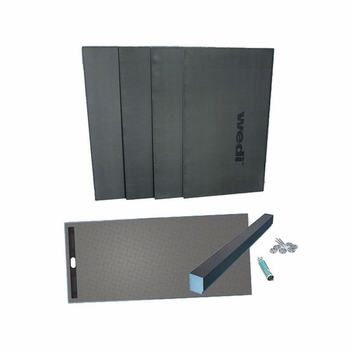